Geneva , nestled on the shores of Lake Geneva, on the left bank is the historic center, dotted with emblematic antique shops and art galleries and chaired by the Place du Bourg de Four and Saint Pierre Cathedral. On the other side of the lake are modern avenues dotted with luxurious hotels and well-known restaurants. Geneva, a cosmopolitan city, the premier financial and diplomatic center and headquarters of the United Nations and the International Red Cross, is known as the capital of peace.

From the left bank of Lake Geneva, the largest lake in Europe, we enjoy the views of the jet d’eau, jet of water, the symbol of the cosmopolitan Geneva, a water spout that rises 140 meters high over the blue sky Of Geneva. The mounts, small water taxis, of characteristic yellow color, sail continuously communicating ashore with another one of Lake Geneva. 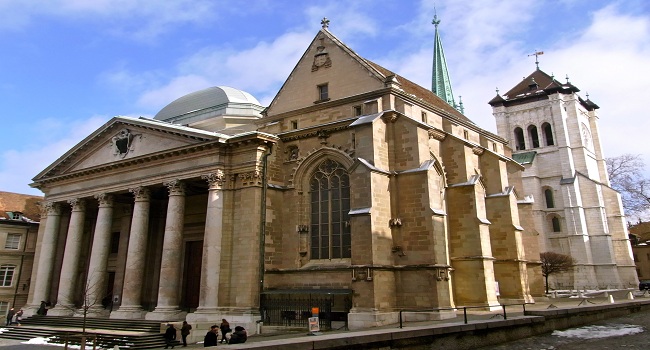 Another icon of the capital of peace is the Flower Clock “Horloge Fleurie” set in the English Garden since 1955 has become a world symbol of the Geneva watch industry. The passage of the seasons confirms the beautiful tonalities of the floral background of the monumental clock.

We enter the well-kept historic center of Geneva, the agora of the city is the Place du Bourg de Four, the oldest square in Geneva, during the Middle Ages held the market of the city. Surrounded by historic buildings and lively terraces where to stop on the road, savoring a delicious native wine, before continuing the visit.

We follow the route through the cobbled streets of ancient Geneva, dotted with antiquarian shops, art galleries, museums and luxurious watchmaking shops, which display masterpieces of watchmaking up to Grand Rue, one of the oldest streets and Best preserved of the old town, at number 40 of the street stands the birthplace of Jean-Jacques Rousseau.

We continue the way to the Saint Pierre Cathedral, which overlooks the historic center. The cathedral, a crucible of architectural styles, began its construction in the 12th century. Historically linked to the Protestant Reformation of Jean Calvin during the sixteenth century. If the forces accompany it is advisable to climb the 157 steps of the north tower, from the top the views of the city and Lake Geneva are spectacular.

A few steps away, in the oldest part of the city, rises The Hotel de Ville, the Town Hall of Geneva, is considered an architectural masterpiece of the fifteenth century, with a unique ramp that allows access to the upper floors both on foot and Mounted on horseback. Within its historic walls is the Alabama Room, where the First Geneva Convention took place, which gave birth to the International Red Cross.

The Park des Bastions is the lung of the historic center of Geneva, a place of recreation of the Geneva during the summer months. In the center of the park stands the Wall of the Reformers, four impressive statues of the great characters of the Calvinist reform. Jean Calvin, Guillaume Farel, Thédore de Beze and Jon Knox and engraved on the wall, the motto of Geneva, “Post terne Lora’s lux”, after the shadow, the light.

We cross to the right bank of Lake Geneva by the Mont Blanc bridge, beautifully adorned with the flags of Switzerland and the cantons, and with floral motifs to know the most modern Geneva and from there take a tram that brings us to the heart of Geneva The Plaza des Nations, where several buildings are housed in important institutions and in which the United Nations Palace, which offers guided tours to its visitors, stands on Broken Plaza, by the sculptor Daniel Berset, a work Full of symbolism, a tribute to the victims of the antipersonnel mines, a huge chair of twelve meters high, which rests on three legs, the fourth has been torn in half.

A few meters from the Plaza, there is the Museum of the International Red Cross, worthy of being visited if time is available.

From several points of the city, you can admire the beautiful golden domes of the Russian Orthodox Church, which overlook the sky of Geneva. The beautiful Orthodox temple nestled above the Eaux-Vives neighborhood was built in 1866 on the site of an ancient Benedictine priory. In the Muscovite Byzantine style, its interior houses several orthodox icons.