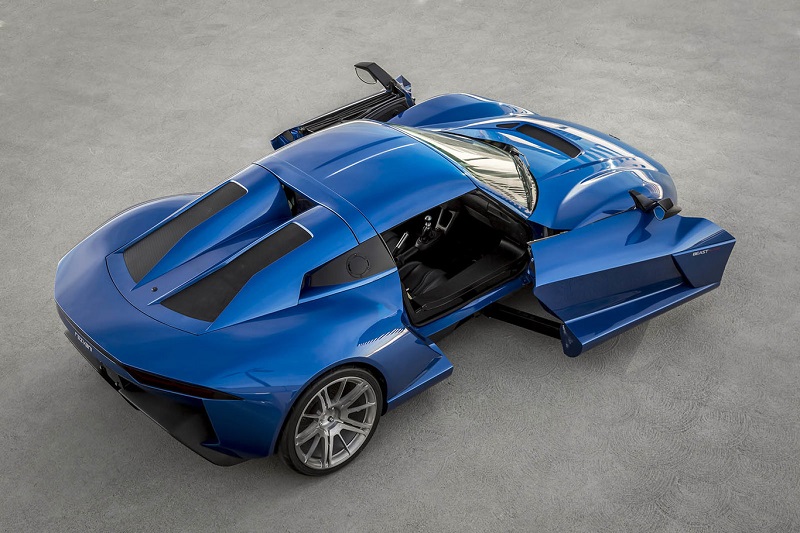 Opening and closing the car doors is a fairly common act, although some want us to do with an app. In fact, since the early days of the automobile, the kinematics of opening the doors has not changed much. They open turning forward or backward.

Over time, we have seen most original examples, such as the “Gullwing” of the Mercedes 300 SL of 1954 and recovered by the Mercedes-AMG SLS, or scissor doors of the Lamborghini Countach and his successors. Except for the gullwing (especially if your name Tesla and evolve a ‘hawk wings’), are easy to deploy systems in any car. Of course, always the life there are complicated with doors that disappear and other original ideas.

The Kaiser-Darrin entered history through its doors that disappear into the front flippers. Howard “Dutch” Darrin was a renowned coachbuilder in France and then in the US before World War II. In 1945 he was appointed chief designer of the firm Kaiser-Frazer. In 1952, he left the company because he did not like how alter their designs. 1953 Henry J was one of those altered designs, but Howard wanted to teach Kaiser-Frazer what could be done with that little car.

Howard Darrin design based on the Henry J two-seater roadster with fiberglass body was the first car with USA- fiber body and showed it to the directors of Kaiser-Frazer. These, seeing the design (sporty, elegant and original doors), agreed to manufacture under the brand Kaiser-Darrin.

435 units were manufactured between 1953 and 1955. Of these, 100 were not initially sold and subsequently Kaiser equipped them with a V8 Cadillac rather modest 6 in original line.

Z roadsters are a tradition at BMW, but really, it all started in 1988 with the BMW Z1. Initially, the Z1 was intended as a showcase for the innovative designs of BMW. The Z concept (for Zukunft, future, in German) is a roadster with the inline 6 -cylinder 325i (2.5 – liter 170 hp) in front center position debuting in 1987 at the Frankfurt Motor Show.

The design is so innovative and unusual in BMW starting to get orders without even knowing if the car was manufactured. The body is plastic and can be changed all panels in one hour (the style of the Smart), however highlighted by its doors disappearing into the skirts.

When a roadster, what is sought is to be in communion with the road and be at least possible it surrounded the car is driven. With the BMW Z1, it was achieved as in any other car to date. And it can be driven with lowered doors. 8000 units between 1988 and 1994 were made.

This model never reached the production stage. Jatech thought reinventing the door with his revolving door. In terms of style, especially in a coupe as the Lincoln Continental Mark VIII, this system allows dispensing with the central pillars, while at the same time facilitates entering or leaving the cockpit.

However, the complexity of the system and the need to redesign an important part of the car : relocation of the fuel tank, electric motors for doors or compressed air system, side airbags, emergency opening, etc. Come on, a puzzle that no one wanted to present his car. Moreover, it is known, no manufacturer was interested in that patent. Normal if we think Jatech claimed that his system was lighter and improved structural rigidity of the car. Removing the B – pillar and añdiendo a complex system of opening doors.

Large doors required the development of a complex system of opening doors with double hinge, which slightly advancing the doors once opened, forcing articulate interior elements, such as power windows. The aim was to facilitate access on board in the narrow parking spaces of our continent.

The car was not very successful three remained in production and after 8,557 manufactured units, Renault withdrew it from the catalog.

It is the latest addition to this panel. Unlike other manufacturers of supercars Rezvani Motorpsorts bases and known for his creations. After Rezvani Beast, Ariel Atom bodywork, the California manufacturer unveiled at the Los Angeles step Beast Alpha based on a Lotus Exige, but with Honda engine powered by Rezvani to 500 hp.

Besides being an original exercise style, Rezvani Beast Alpha is characterized by complex opening doors. It moves first out and then forward. At bottom, it is a spectacular opening system version seen in the Renault Avantime.

Some of these proposals have a role, either improve access to car parks or emphasize driving sensations, while others, being totally honest, do nothing. Obviously, this is just a small sample and there are more examples, both in urban cars like the Peugeot 1007, or industrial vehicles such as the Renault Estafette.